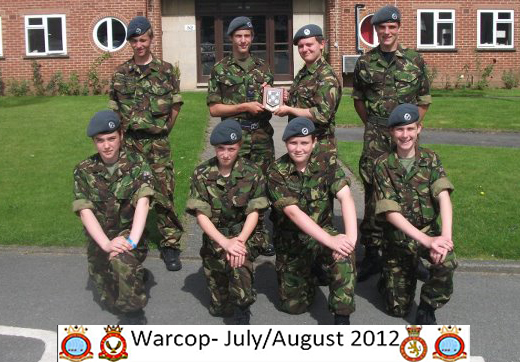 As an organisation the Air Training Corps give cadets the opportunities to give you a taste of life in the RAF by organising different camps. 1119 squadron are very lucky as we get a lot of opportunities to go on these camps.

Some squadrons in the ATC organise weekend camps that are at local stations such as Nescliffe. These weekend camps normally include shooting, fieldcraft, night-ex's, orienteering, ect.

1119 organised a weekend camp in recent years at Nescliffe and our squadron invited squadrons from our own wing and another squadron from the Staffordshire wing to also enjoy. It was very enjoyable for everyone involved and the cadets were able to make new friends and improve their skills in communication, leadership, team work and become better in activities such as fieldcraft.

Every year a few cadets from 1119 squadron get a chance to attend an annual camp. This is where cadets can try new things, meet cadets from other squadrons and go on sections visits within the RAF station to experience what some jobs in the RAF involve!

Annual Camps normally involve staying on an RAF base (which changes every year), eating in messes and then a range of activities. These camps always involve flying, shooting, sport, fieldcraft, section visits, uniform and room inspections and then other activities such as adventure training, museum visits, etc. that start from the moment you arrive at the RAF station until the moment you leave the coach when you get home.

This year, a number of 1119's cadets attended camps at RAF Valley, RAF Benson and RAF Waddington for a week. Within the week they went flying, shooting, took part in a drill competition and visited the college itself! They also did other activities such as bowling, sport almost every night, kayaking, visits to museums and even a disco at the end. All of the cadets that went said they really enjoyed their experience because they made so many new friends, got to try and enjoy things they wouldn't normally do, learnt new things about the RAF, and bettered themselves as a cadet.

As a squadron we pride ourselves with the relationship we have built with the Army Cadet Force. This provides further opportunities for a number of cadets to go away on the Shropshire ACF Annual Camp.

This Camp provides opportunities in Adventure Training, Shooting, Fieldcraft, Sports, First Aid as well as a host of other activities.

At the age of 15 you can then apply for overseas camps. These camps take place in countries such as Germany, Gibraltar and even Cyprus.

Obviously these camps are a little different as they focus more on looking around local areas, doing activities that aren't really available in the UK and again section visits to see what is like as a member of the RAF overseas and how their work is different. However they do include things that camps within the UK offer such as section visits.

In recent years some 1119's cadets were very lucky to go to RAF Akrotiri in Cyprus! This camp was enjoyed by our cadets as it gave them a chance to visit parts of the beautiful country that is Cyprus, shooting with weapons that aren't really available to cadets in the UK and a look around an RAF case that most cadets within the Air Training Corps aren't able to visit. Furthermore 2014 also saw Cpl Pugh head to Gibraltar as well!!

In 2014 4 cadets from 1119 Sqn went to South Africa with 2 West Mercian Wing on a 3 week expedition which was an extraordinary trip.

In 2015 a number of 1119 are due to go on an expedition to Morocco, which is sure to be yet another extraordinary trip!!

In recent years a number of cadets have been on cultural camps to places such as Poland, Belgium & France. This provides opportunities to visit new places and also spend some time learning and remembering those that thought for our country in the wars.

In 2014 1119 Sqn ran a cultural camp to France and Belgium to coincide with the centenary of The Great War. For many cadets this was deemed as one of the best and memorable trips they have ever been on!!

If you have not yet been on a camp I definitely recommend it. The friends you make and activities you experience are incredible and you gain so many skills from one week that you can use throughout your life in the Air Cadets.